10 questions to ask about tiaras

An in-depth guide to these opulent ornaments for glittering occasions — from royal tiaras worn by queens and princesses to more versatile, wearable and affordable examples.

1. Do you have to be a queen, a princess or a member of the aristocracy to wear a tiara?

In ancient Greece garland-like hair ornaments were used to adorn the heads of sacred statues, given to athletes and warriors to honor victories, and worn by people of high rank at weddings and feasts. These early examples often took the form of gold bands, also known as fillets, or naturalistic foliate wreaths composed of ears of wheat, laurel leaves and flowers. The Romans continued the Greek tradition, but with the eventual demise of their world and the rise of Christianity, the wearing of classical wreaths and diadems declined and almost disappeared.

In the Medieval period crown-shaped jewels, or coronals, were worn by brides of all ranks, but it wasn’t until the 18th century that tiaras as we might know them today became more widely worn. This was probably due to advances in the cutting of gemstones — head ornaments became less the concern of goldsmiths and more the preserve of lapidaries for showing off their gem-setting skills. Relatively simple gold jewels made way for highly impactful and elaborate diamond and colored stone-set examples.

This resurgence of elaborate head ornamentation, displayed principally to denote status and affluence, was also associated with the emergence of a new class of wealthy individuals who were awarded titles and elevated into the aristocracy, as well as a renewed interest in Classical art.

Although many of these 18th-century tiaras have not survived, the tiara of Queen Charlotte, consort of King George III, was offered by Christie’s after her death in 1818. It was described as ‘a superb tiara composed of sprigs of flowers and brilliants, transparent, in setting of bold design, from which are suspended seven large emerald drops, in brilliant frames, a very large white round brilliant in the centre, the border of the whole of rose diamonds’.

Perhaps the peak of the tiara’s popularity, however, was from the 1870s to just before the First World War, when diamonds were plentiful following the discovery of new sources in South Africa, and hairstyles were suitably voluminous.

Throughout the 20th century the wearing of tiaras has fluctuated in line with changes in prosperity and fashion. In the past 20 years there has been a renewed appreciation for this type of jewel, fueled by various high-profile exhibitions and celebrity weddings. Wearing tiaras today is not a question of rank, but a matter of judging whether it is appropriate for the occasion.

2. When should tiaras be worn?

Weddings, white-tie dinners and balls and occasions of state are all traditional events to which one might wear a tiara, however the boundaries are now increasingly blurred. Customarily, tiaras were only worn by married women and given to a bride on her wedding day, but rules are made to be broken — and they frequently are. Similarly, some say that tiaras should only be worn in private residences — and not in hotels, for example — but again, this seems outmoded in today’s more relaxed society.

3. What is the difference between a tiara, a circlet, a bandeau and a diadem?

Tiara: a more generic, overarching term for a number of different styles of head-dress, including diadems, circlets and bandeaux.

Diadem: there are differing opinions on the exact definition of this term. In ancient Greece the word diadem (from the term diadein, meaning to bind around) denoted several different types of head ornament. Later, the word diadem was used to describe a band worn over the head-dress of a king — it was the head-dress itself that was termed a tiara.

Bandeau: a headband-style ornament of low profile, usually without a graduation in height from one side to the other, most often worn on the forehead, and prevalent during the early 20th century.

Kokoshnik: a style of embellished cloth-covered head ornament, often very broad and sitting high on the forehead, from the Russian national costume and folklore tradition. In the later 19th and earlier 20th centuries Fabergé and other jewellers were inspired to produce tiaras in the Russian taste. Kokoshnik tiaras are often designed as a fringe of tapering diamond-set bars or a continuous chevron-shaped panel.

Aigrette: a type of hair ornament worn centrally above the forehead that is designed to support a plume of feathers, or itself depicting a gem-set feather motif. The word is derived from the egret, the feathers of which were often used with these pieces.

Coronet: a miniature or simple crown, especially as worn by lesser royalty and peers or peeresses. Often made of gilded silver with velvet denoting rank: a viscountess’s coronet, for example, would have 16 ball or ‘pearl’ finials, whereas a countess’s coronet would have eight. Occasionally worn together with a tiara.

4. Besides diamonds, which gemstones are used for tiaras?

In the late 18th and early 19th century tiaras were commonly set with a wide variety of gemstones including coral, pearls, amethyst, turquoise, topaz and citrine — sometimes with diamonds and sometimes without. Cut steel and Berlin iron, although of low intrinsic value, were still of high status, and cameos and intaglios in all their forms were popular throughout the Napoleonic period.

In the later 19th century diamonds dominated but were often combined with sapphires, emeralds, rubies and pearls. By the 20th century the emphasis was more on design, resulting in the use of less precious but still beautiful stones such as aquamarines, onyx, citrine and rock crystal.

Primarily they are private individuals who are purchasing a tiara for the first time, usually for a wedding. In comparison to the overall cost of a wedding, a tiara or hair ornament does not need to be a wild extravagance and can be purchased for as little as £5,000 to £10,000. The other attraction is that these pieces can often be kept in the family and lent to other family members for their weddings.

Other buyers include jewelry connoisseurs who wish to crown their collections with a jewel epitomizing royal splendor, and professional jewelry dealers who wish to have tiaras available for loan to their clients.

Also buyers collecting tiaras of various styles to be exhibited in their private exhibition spaces. Similarly, museums and galleries occasionally purchase pieces to add to their existing collections. From time to time when an extraordinary signed tiara — most likely from the Art Deco, Art Nouveau or Belle Époque periods — comes to the market, the same jewelry house that created it all those years ago may buy it back to sell it on or keep it as part of its archive collection.

6. Are tiaras difficult to wear?

People sometimes think that there are limited occasions on which one can wear a tiara, but this is not always the case. Many tiaras, particularly 19th-century examples, are highly versatile and can be worn not only as a headpiece for a very formal occasion, but can also transform into a necklace for less formal events, such as the opera or a black-tie party.

Some examples can further dismantle to form brooches, hair pins, earrings and/or bracelets that can be worn in a much more relaxed environment. This means that if you are attending a social occasion that does not quite call for the full regalia, you can wear an arrangement of diamond-set brooches on your lapel or waist, or perhaps a couple of diamond pins in your hair.

Other common misconceptions are that tiaras are heavy, old-fashioned or fussy in design. Of course, some antique examples are highly elaborate and were made during a period when women wore high pads of false hair. Such examples (known colloquially as ‘fenders’) can be disproportionately high, and are not as easy to wear with modern hairstyles. There are, however, many tiaras from the early 20th century that have a fresh and modern aesthetic — for example, the simple, diamond-set Belle Époque diadem, below, and Art Deco tiara by Cartier pictured above could easily be worn as an accompaniment to a modern gown or dress.

7. Tiaras for sale — is it possible to find affordable examples at auction?

Absolutely. Over the years Christie’s have offered many beautiful tiaras in our London auctions, with estimates starting from approximately £3,000 for smaller antique examples.

Unsurprisingly, as the gemstone content increases so does the price, but it is still possible to find more significant examples for under £15,000.

8. Royal tiaras — what are some of spectacular tiaras sold at Christie’s?

In 2006, Christie’s was entrusted with selling The Collection of Princess Margaret. Among the beautiful pieces in her collection was the Poltimore Tiara, pictured near the top of this story — an elaborate late 19th-century jewel of impressive scale. It was bought in 1959 just prior to the announcement of her engagement to Mr Antony Armstrong-Jones. The princess wore the transformable tiara as a necklace on many state and official occasions but, most famously, on her wedding day at Westminster Abbey in 1960.

In 2007 Christie’s sold a magnificent tiara set with a graduated series of large diamond briolettes by Fabergé. Important antique jewels by the house of Fabergé are very rare, although tiaras are rarer still since relatively few were produced. Contributing greatly to the importance of the piece is its well-cataloged provenance, which includes Queen Maria José and the King of Belgium. Furthermore, the briolette-cut diamonds were said to have been a gift from Tsar Alexander I of Russia to the Empress Josephine.

More recently, in 2015, Christie’s offered in our Geneva saleroom a beautiful Belle Époque blue enamel and diamond tiara by Chaumet (above), which was bought by the Duke of Westminster for his wife on the event of the coronation of George V and Queen Mary in 1911. The plique-à-jour  enamelling, giving the appearance of a glowing stained-glass window when held up to the light, is very delicate but has remained in immaculate condition despite its age, making the piece a very rare survival.

9. What other jewels can be worn in the hair?

If you do not own a tiara but have in your jewel box a pretty pair of double-clip brooches, these can be used successfully to adorn the hair, perhaps pinned in to either side of a chignon, or used as clips to keep loose hair back. Pins can be used in the same manner, to best effect with three or four slid into an up-do.

If you have a bracelet or necklace that you would like to wear as a tiara, a good jeweler may be able to produce a discreet frame so that it can be worn in the hair. This could work well with a diamond rivière necklace, for example.

It is worth mentioning that great care must be taken when wearing jewels in this way that are not designed as hair accessories — you can always ask your hairdresser how to secure them firmly in place to avoid them coming loose or slipping out.

Elizabeth Taylor knew how to make an entrance, and would often wear brooches from her extensive jewelry collection in her bouffant-style coiffure to draw attention and to add height. Diana, Princess of Wales, of course, also famously employed an Art Deco bracelet as a bandeau worn on her forehead.

The ideal head ornament would be a diamond-set tiara ideally from the Art Deco period or early 20th century — something light in appearance that does not sit too high on the head, with an elegant and understated design. If I could find an example that transforms into a pair of bracelets or a necklace, then that would be very chic. 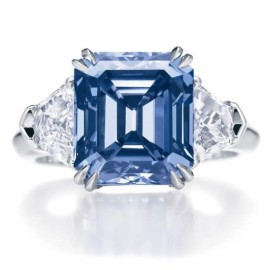