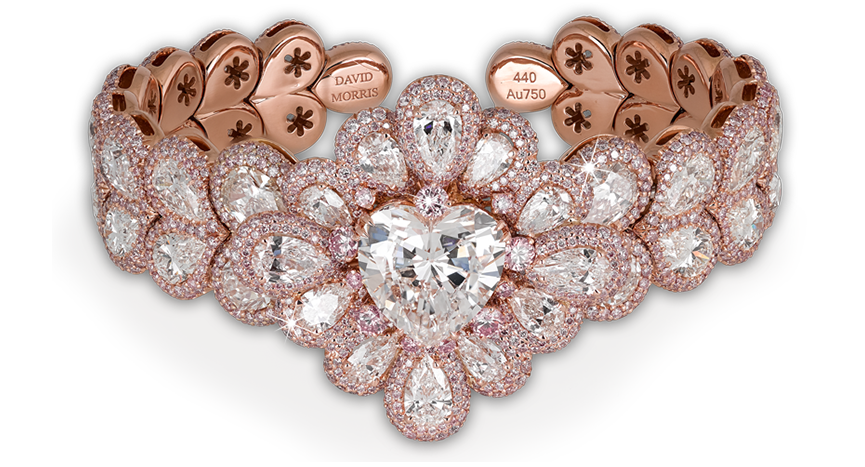 The legendary career of David Morris began in 1951, when at age 15, he learned the craft of diamond mounting by apprenticing a master jeweller in Hatton Garden, the centre of London’s jewellery trade. After a short stint at London’s Central School of Arts and Crafts, he qualified as a goldsmith in 1959. Setting up his own Hatton Garden jewellery firm in 1962, David Morris quickly became an internationally known name as he and his design partner, Anne Seymour, successively claimed the ninth and tenth De Beers Diamonds International Awards, given annually in New York to promote innovative design.

Today, the skilled craftsmen in the New Bond Street workshop bring Jeremy’s visions to life. Each jewel is hand-made, they are mostly one-of-a-kind and there are no mass-production techniques.

In 2003, Jeremy Morris was appointed managing director and principal designer of David Morris. Renowned for creating unique pieces from coloured precious gems in innovative shapes and unusual hues, Jeremy allows each precious stone’s inherent characteristics to inspire his design process. Under Jeremy’s direction, David Morris has expanded globally while continuing the tradition of adorning the world’s most beautiful women with the likes of Gwyneth Paltrow, Salma Hayek, Yasmin Le Bon, Eva Mendes and Beyoncé all appearing on the red carpet in spectacular David Morris jewels.

For over five decades, royalty and international collectors have composed the clientele of the esteemed British jewellery brand which David Morris established in 1962. Jeremy Morris has since followed in his father’s footsteps and is now managing director and principal designer of David Morris. From within the elegant New Bond Street atelier, in the heart of London, beautiful couture jewellery is hand crafted to the highest standards using only the finest stones to ensure each unique piece is a work of art. We look forward to welcoming you to one of our boutiques in the near future.