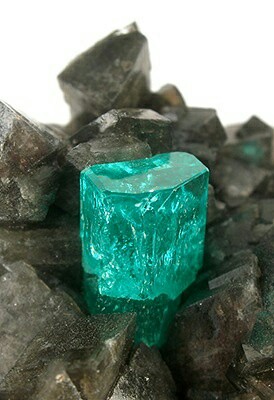 Emerald is the most precious stone in the beryl group. The name comes from the old French word ‘esmeralde’, which was derived from the Greek word ‘smaragdos’ meaning ‘green stone’. By definition, emerald is any medium to dark green beryl colored by chromium. Green beryl colored only by vanadium is not considered to be true emerald, but rather as simply green beryl. Since the 1960s, the American jewelry industry changed the definition to include vanadium colored beryl as ’emerald’, but in the UK and Europe, they are still not recognized as such. The historical green color of emerald is unparalleled in the world of gemstones and it is considered as one of the most ‘precious four’ of all gemstones, which also includes sapphire, ruby and diamond. Although emeralds are one of the most valuable gemstones available today, most are very heavily included, rendering their resistance to breakage as generally poor. According to GIA, emerald is a Type III clarity gemstone, which means that even good quality emerald used in fine jewelry today is in the I2 to I3 range.

Although Colombia is the most famous source for ‘deep green’ emeralds, emerald deposits are mined from many locations around the world. Recent decades have seen emerald production increase as a result of newly discovered deposits in South America, Africa and across Europe. Today, Brazil and Zambia are among the leading producers of fine emeralds, following Colombia. Brazilian emeralds are prized for their excellent clarity and slightly yellowish green color, while Zambian emeralds are desired for their slightly bluish green color, which is similar to that of Colombia’s ’emerald-green’


Eyes Desire Gems and Jewelry looks at the most gorgeous jewelry around the world.